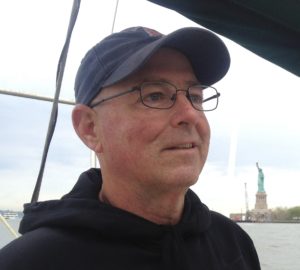 “Jump Ship”, to exit or leave  the boat quickly w/o the captain’s permission.

I awoke for my watch to relieve Joel as pilot.  He took over as watch mate, assisting me by scanning the watery horizon for approaching boat traffic.  It was a beautiful starlit night and we were motor sailing, under engine and sail power, north along the N.J. coast heading for N.Y. harbor.  There was just enough wind to drive the Genoa, a large jib, and coupled with the motor we were making seven knots.  Joel told me I had just missed a lot of boat traffic and to expect more even at this early hour.  I took over the wheel.

I was excited about today.  This was to be my first time sailing into New York City, among the busiest harbors on the east coast. I was focused on the northern horizon in anticipation of seeing the Statue of Liberty as well as the famous skyline.

It was actually fairly quiet until I heard over the radio “calling northbound sailing vessel, north bound sailing vessel”.  I looked around for a northbound sailing vessel then realized they were calling me! I replied and gave my coordinates ‘lat/long” and told them that we were holding course.  They replied with a “roger that” and pretty soon the overtaking freighter eased out of the night, past our starboard bow, dwarfing our small boat.  Her wake alone pushed higher than our freeboard. 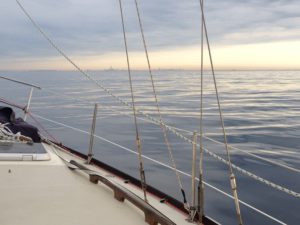 I continued on a few more miles with occasional sightings and radio calls and then I saw it.  The faint light ahead could have been a radio tower or some other kind of land light, after all we were still 35 miles from the City, but a gut feeling told me it was the New World Trade Center. In awe, I zeroed in on this beacon as my destination.

A few weeks earlier, I had read about the tower’s completion, the installation of a 408 foot spire making the building’s height 1,776 feet, surpassing the previous height of the largest Twin Tower at 1,727 feet. And the New World Trade Center became the tallest building in the U.S.

False dawn came at about 0330 (3:30 am) with an illusion of brightening in the north east.  My watch mate and I stirred around and prepared another cup of sailor’s brew, a mix of coffee and hot chocolate. True dawn came an hour after that. With an unmistakable lightening in the east, the stars started blinking out and grey clouds were becoming visible.

These grey clouds formed an arc across the sky, lit up by the sun still below the horizon.  They formed a sort of rising curtain for the coming day with banded colors of yellows into reds and then into the darker colors into the previous night.  It was amazing and reminded me of grand seascapes by the Dutch masters, except I had to keep reminding myself, this was real. 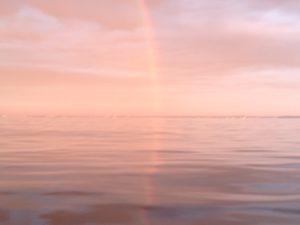 As if this wasn’t enough directly opposite this vivid painting to the west, the waiting sun lit up a rainbow.  With the water almost still and calm it was hard to tell where the rainbow ended and the water began.

We sat in silence consuming the beauty of the dawn. No one slept; we traded watch and watch mate jobs every two hours.

With each passing hour, the New York skyline became more discernible.  My directional beacon, the New World Trade Center was the highlight.  Uptown we could see the Empire State Building and beyond.  The whole line of buildings looked like dominoes in the distance.

The channel to the entrance of the inner harbor became narrower and we jockeyed for space between the merchant freighters.  Even though we had right of way as a sailing vessel we sure didn’t insist on it.  I’m not sure some of these ships even were able to see us below their high bulkheads.  The Verrazano Narrows Bridge, the largest in the Americas, was suspended above us.  Sailing underneath such an inspiring structure, it was hard to imagine how it was built back in the 1960’s.

Finally at 1100 hours (11:00 am) the inner harbor opened before us and it was my watch again. Eagerly I took the wheel, thrilled that New York Harbor was mine to captain. I quickly abandoned the idea of a straight and steady course up the channel.  There simply was too much traffic.  On a relatively clear Saturday morning it seemed everyone who had a boat was floating around out there.  Besides the working barges and freighter traffic , there was a continuous stream from the Circle Line and Staten Island Ferries.  Then there were the many dozens of sightseeing boats full of tourists randomly turning here and there with little warning. And if the pleasure boats and private yachts weren’t enough there was a sailing regatta right off Battery Park with dozens of sailboats to add to the flotilla.  There were even kayaks and standup paddle boarders dotting the mix.  I was on high alert constantly scanning and assessing who had the right of way, who might be turning and which way to pass, cross or hold back.

Among the pandemonium of traffic, there was a large cabin cruiser insanely anchored right in front of Liberty Island, blocking access to and from the Statue of Liberty landing.  Six idiots were fishing off the backside of the boat, yelling at anyone who got close for scaring off the fish! 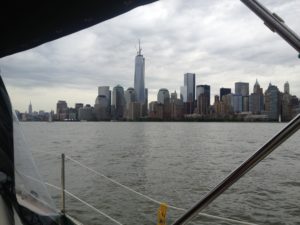 Still, cruising into this famous harbor was the latest highlight of my sailing career.  To be piloting up the Hudson River with skyscrapers off either shore, the Statue of Liberty shining down on us, the World Trade Center and the Empire State Building acting as land marks, this scene burned into my brain as a life memory.

Are you wondering why I call this story “Jump ship”? Well a crew mate and I had to get off the boat in New York at about 39th street in Manhattan to catch a bus back to Burlington. My job had been to assist the captain with the ocean sailing, and though it would have been interesting to come up the Hudson and through the canal system to Lake Champlain, I couldn’t spare the time. I had Hot Yoga classes to teach and had to get home!

With only nautical charts on board, we didn’t have access to street number locations. And of course the street signs are not visible from the water.  I thought we might find a waterfront park where we could tie-up, orient and get off but none was to be found.

At what we guessed was about 39tth  Street because the Empire State Building was nearby, we sighted  a long pier with a platform three feet higher  than our deck.  The boat captain decided to leave us off there. The tide was flooding in at a quick rate and we couldn’t hold the boat still.  The captain didn’t want to tie up, so he motored as close to the pier as possible and yelled to us to jump. My crew mate threw his pack up onto the pier, waited for the waves to crest lifting him closer to the top edge of the pier, and scrambled up. On the next wave, I grasped the bollard, a huge freighter cleat with each horn the length and thickness of a study man’s thigh and pulled myself onto the pier. We then climbed a four foot chained link fence as the captain turned the boat back into the river.

Our welcome to New York was a security guard in a golf cart, careening toward us. The guy was yelling and screaming for us to get off the pier and back onto the boat which by now was impossible as it was pulling away.  The guard threatened to call the police, yelling at the boat captain to come back and pick us up.  I grabbed my sea bag and nodded to my crew mate to beat feet down the pier, a length of three foot ball fields. Off we trotted in zigzags as fast as our sea legs would carry us, the solid pier seemingly rising and falling like waves.  Soon the security guard’s cursing drifted off and he gave up. We reached an old warehouse door, pulled it open to find it had been converted into a parking garage, crossed through the building and pulled open the door, stepping out into the throng of Hell’s Kitchen. The street wasn’t feeling any steadier than the pier. And the noise nearly knocked me over, after five days on the silent Atlantic.

This all happened so quickly I didn’t stop to think about the risks of our actions. We may have fallen off the boat into the harbor; we could have pinched ourselves between the boat and the pier.  The cops could have come and picked us up as trespassers or worse, suspected terrorists or illegal immigrants. But as it was, we stumbled off the pier onto 12th avenue, around 30th Street, only nine blocks from our bus stop. Walking north, we were now travelling on a different sea, one of traffic, noise, congestion and people. It was the roiling sea that is New York City.

About the Author: William O'Connor

Bill is passionate about yoga and sharing his love for the practice for over 15 years with more than 4,000 teaching hours. He is married to his favorite yoga teacher, Andrea, for 30 + years. He is also an avid sailor with distance passages across the Atlantic and down and back to the Caribbean many times.